3% increase in the salary of state government employees

3% increase in the salary of state government employees 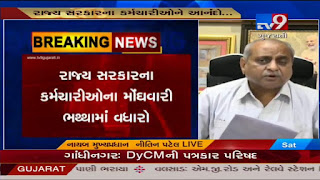 This increase will be paid with the July salary. Prior to being introduced in the general budget assembly of Gujarat government on July 2, Finance Minister Nitin Patel decided to raise the dearness allowance of 9 lakh employees of the Gujarat government by 3% to 12%. It is noteworthy that the demand for various employee congregations, including the teacher’s union, was accepted. Granted school teachers are also covered in this.
3% increase in the salary of state government employees
important link-
Read News REPORT – OFFICIAL PRESS NOTE

Talk of work / government gave money to buy LPG cylinders, know whether it came to your account or not?