Sign in
Sign in
Welcome!Log into your account
Forgot your password?
Password recovery
Recover your password
Sign in
Welcome! Log into your account
Forgot your password? Get help
Password recovery
Recover your password
A password will be e-mailed to you.
EDUCATION ALEART DIGITAL WAY OF EDUCATION
Home SCHOOL DOWNLOAD INTERNATIONAL YOGA DAY SPECIAL E-BOOKS AND WORD AAYOJAN FILE
Facebook
Twitter
WhatsApp
Telegram
The celebrations of World Yoga Day was not only confined to the students and white collar employees of India, but also reached out to the prison inmates in Jharkhand and Uttar Pradesh. On the initiative of Art of Living around 2000 prison inmates across 26 prisons in Jharkhand and Varanasi, participated in yoga sessions for a better living experience.
Glamorous Bollywood celebrities participated in the event and Bollywood actress Shilpa Shetty joined the celebrations in Bangalore and performed different asana in front of 10000 people under the open sky. Latter on she took to her twitter handle to describe the experience as motivating and exciting.

INTERNATIONAL YOGA DAY SPECIAL 2016 BOOK
UN Declaration
On 11 December 2014, India’s Permanent Representative Asoke Mukherji introduced the draft resolution in the United Nations General Assembly. The draft text received broad support from 177 Member States who sponsored the text, which was adopted without a vote. This initiative found support from many global leaders. A total of 177 nations co-sponsored the resolution, which is the highest number of co-sponsors ever for any UNGA resolution of such nature.
When proposing 21 June as the date, Modi said that the date was the longest day of the year in the northern hemisphere (shortest in the southern hemisphere), having special significance in many parts of the world. From the perspective of yoga, the summer solstice marks the transition to Dakshinayana. The second  full moon after summer solstice is known as Guru Poornima. Shiva, the first yogi (Adi Yogi), is said to have begun imparting the knowledge of yoga to the rest of mankind on this day, and became the first guru (Adi Guru).Dakshinayana is also considered a time when there is natural support for those pursuing spiritual practices.
Following the adoption of the UN resolution, several leaders of the spiritual movement in India voiced their support for the initiative. The founder of Isha Foundation, Sadhguru, stated, “this could be a kind of a foundation stone to make scientific approach to the inner well-being of the human being, a worldwide thing… It’s a tremendous step for the world.”The founder of Art of Living, Ravi Shankar, lauded the efforts of Modi, saying, “It is very difficult for any philosophy, religion or culture to survive without state patronage. Yoga has existed so far almost like an orphan. Now, official recognition by the UN would further spread the benefit of yoga to the entire world.”
Important Links:-
◆YOGA BOOK GUJARATI DOWNLOAD CLICK HERE
◆YOGA BOOK ENGLISH DOWNLOAD CLICK HERE
International Yoga Day 2015
International Yoga Day on board INS Jalashwa
The first International Day of Yoga was observed around the world on 21 June 2015. The Ministry of AYUSH made the necessary arrangements in India. 35,985 people, including Narendra Modi and dignitaries from 84 nations, performed 21 asanas (yoga postures) for 35 minutes at Rajpath in New Delhi. The day was observed by millions across the world.NCC cadets entered the Limca Book of Records for the “largest yoga performance simultaneously by a single uniformed youth organisation” by performing at multiple venues.
The event at Rajpath established two Guinness world records awarded to the Ministry of AYUSH, and received by the minister Shripad Yesso Naik. They were for the largest yoga class, of 35,985 people,and for the largest number of participating nationalities (84 nations).In San Francisco, 5,000 participants gathered in the Marina Green park to practice yoga.
International Yoga Day 2016
A senior government official said, “The government of India has decided to take forward the momentum created by International Day of Yoga, 2015 with greater and more active participation of youth during the current year celebrations.”The ministry organized an event titled “The National Event of Mass Yoga Demonstration” at Chandigarh, which was to be attended by the Indian Prime Minister.
India’s Permanent Mission to the UN organized celebrations at the United Nations on 20 and 21 June 2016. A special event titled “Conversation with Yoga Masters – Yoga for the achievement of the Sustainable Development Goals” was the centerpiece.Jaggi Vasudev was the main speaker at the event.
Download E Book Click Here 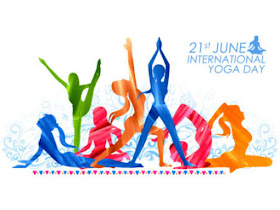 International Yoga Day 2017
In Lucknow, the Indian prime minister Narendra Modi participated in the event and practiced yoga along with 51,000 participants.Many business leaders in India also took part in the event.In New York, thousands of participants gathered to practice yoga on Times Square. Japan created a Parliamentary League for the promotion of yoga just prior to the event, in April 2017.In China, the largest gathering was 10,000 participants in the city of Wuxi.In Athens, the event took place on 25 June as part of the Greek Open Yoga Dayand in Kyiv, the event happened on 18 June and gathered a few hundred participants.In Ireland, participants met in the round room of the City Hall in Dublin.
International Yoga Day 2018
The event in [[Dehradun]] was held at the Forest Research Institute. PM Modi led an estimated 50,000 volunteers to mark the fourth anniversary of International Yoga Day. The theme for 2018 was “Yoga for Peace”.[33] Over 100,000 people gathered at a yoga session in Kota, Rajasthan and performed yoga together, earning the city a Guinness World Record.
International Yoga Day 2019
Most awaited yearly Yoga extravaganza will be held in Ranchi, the capital of Indian state Jharkhand on Friday 21st June 2019. International Yoga Day 2019 Ranchi will witness over 30,000 people participation, led by Prime Minister Narendra Modi, which is to be held at the Prabhat Tara ground in Jharkhand’s Ranchi.
Yoga NCERT Book Click Here
YOGA WORD FILE:-